Anna M. Taylor gives us A Peek Through her Window. Don’t be scared.

Interests:  I am obsessed with history. As a kid, I loved reading biographies and about bygone eras and the histories of people and their countries. That love has not abated. You can find me watching documentary after documentary on any and all platforms I have access to. I blog monthly on Delilah Devlin’s blog about all things historical. My love of history shows up in my erotic romances where I write about romance and resilience in the African-American community starting in the post-Reconstruction Era. I’m also intrigued by the supernatural. My religious background has me investigating all sorts of paranormal and psychic phenomena which find their way into my gothic romances. My Haunted Harlem series touches on the “ghosts” of internalized racism and secrets that can only be exorcised and revealed by the power of love.

Network:  I belong to several writing communities: Romance Writers of America and five of its chapters, Women’s Fiction Association and Romance Slam Jam.  and although I’m retired I still participate as a member of the Metropolitan Association of the United Church of Christ, the Presbytery of Northeast New Jersey and the Interim Ministry Network.

Desk: My lap is my desk, but in the summer I have begun to use the patio table in our backyard. I’ve got a multi-outlet surge protector for the four or five electronic devices to keep my happy outside (fan, CD player, phone charger, a laptop fan surface to keep my computer cool)

Outrageous: I have a memory for songs from Broadway musicals that is out of this world. In high school my favorite section was always the plays. Growing up the Donell Music Library and the Lincoln Center Library for the Performing Arts saw me checking out scripts, LPs (see how long ago this was?) every weekend. I often surprise myself when I hear a song and know it.

Window: Outside my window is one of two bird feeders that attract all manner of birds. We also have a rock fountain with its water turned off so I can leave food for a rabbit I’ve named Brownie and two squirrels I’ve named L’il Squirrel and GrayBoy. As you can see L’il Squirrel also helps him/herself to the spilled seed beneath the bird feeder. 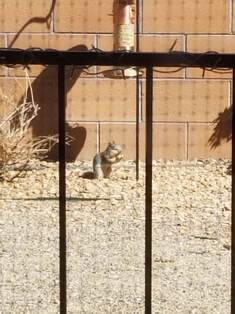 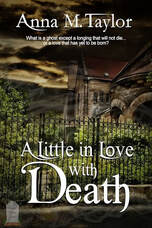 A Little in Love With Death by Anna M. Taylor

Ten years ago no one — not even the man who said he loved her — believed Sankofa Lawford’s claim she had been brutally attacked by a ghost. Ten years later an assault on a new victim brings her back to Harlem to a mother going mad, a brother at his wits’ end and a former love who wants a second chance. Sankofa longs for her family to be whole again, for love to be hers again, but not if she must relive the emotional pain created by memories of that night.

Mitchell Emerson is convinced science and reason can account for the ghostly happenings at Umoja House. He resolves to find an explanation that will not only satisfy him but earn back Sankofa’s trust and love. Instead, his own beliefs are shaken when he sees the ghost for himself.

Now reluctant allies, Mitchell and Sankofa learn her family was more than a little in love with death. Their search for the ghost draws them together but discovering sixty years of lies and secrets pulls them apart. As their hopes for happily ever after and dispersing the evil stalking Umoja House slip beyond their grasp, Mitchell and Sankofa find an unexpected source of help: the ghost itself.
​
A deeper peek
Anna M. Taylor is the women’s fiction and gothic romance penname of Anna Taylor Sweringen, a retired United Church of Christ and Presbyterian Church USA minister. A native New Yorker, she now enjoys the heat of the Southwest. She has been writing seriously since joining Romance Writers of America in 2003 and also writes inspirational romance as Anna Taylor and erotic romance as Michal Scott.