What do campers, shoes, bears, and cheese have in common? My weekend. Come on by and Take a Peek.

Share it!
Where Camping season is open! Huzzah! That said, out my window recently has been campers of all sizes and shapes. Horses pulling buggies had Hali going alil cray-cray. She even barked once. She doesn’t bark. Well, hardly ever. And Clock Tower Cheese shop didn’t disappoint. The weather was a bit off. Chilly and rainy for much of it, but who cared? We were at camp.

Interests One of our favorite things to do is visit antique and collectible shops. Among the favorites is Cackleberry Antiques Mall cackleberryfarmantiquemall.com/ 272 Antiques www.272antiques.com/ and The German Trading Post. This is all in or near Adamstown, Pa. www.antiquescapital.com/ is a link where you can check out a lot of other places too.

Networking Campers love to talk, especially with Pete, who is much more outgoing than me, and share their favorite spots, camping adventures, and the men? All things truck and hitch related. Since I’m much more introverted, he does recon and reports back about dogs, campers, and people.

Downtime Well, as an author, blogger, and cooking maven ( and searching for internet signal), I keep quite busy, though open fire cooking was not in the cards this trip. Storms and rain passed through, and the only night we had without rain was spent with local friends. I prepped, and Pete cooked on the Blackstone. Other times we played cards. DH and I have a running Rummy game that is around 270,000 points. We’re usually within 150 points of each other. Kings in the Corner is another favorite we play.

Outlook for the next couple of months is exciting. This weekend missionary friends from Webster County Christian Workcamp in West Virginia are visiting. Several will be driveway camping in 2HOOTS (our camper). Others will be nearby in the church manse. It’s also our 27th Anniversary on Friday. I retire on May 28th (I wonder if I’ll get a gold watch…lol). Then it’s off on many adventures. I hope to see other Wild Rose Press authors, writing friends, and some of my favorite writers at the Florida West Coast Writers Conference. Then across the state to see some cousins I haven’t seen in 27 years.

What’s on the Horizon? In June, I’m looking forward to hearing back from Elf, my editor on Jazz House. I missed the deadline for the Christmas Cookie submissions. Covid and elderly parent issues put me way behind, so I intend to work on Christmas Cookie Chaos. I’m also slogging through edits on Aimhirghin, Kingdom at a Crossroad. What else? Not sure, but the road and many more books are calling.

Blurb
Jordan Vasilakis is on the run, living under the assumed name of Madeline Cielo. After a disastrous marriage to a notorious Greek business tycoon, she’s rebuilding her life as a jazz singer.
Police officer Michael Machau is friends with the House family, who have welcomed him into their lives. But their family is in danger from a woman who has already injured them.
Jazz House, a modern throwback to jazz music’s heyday, brings together a dedicated police officer and a woman living a lie. Can lives be rebuilt after so much destruction?

Aimhirghin, Kingdom at a Crossroad
Fantasy Romance
160,000 words (Oh My! I may have to split it in two, but this is what editing is all about) Do you want a laugh? In 2014 I labeled it with “Final Draft.”
Blurb
On a cliff overlooking Alleen, Kíeran, Prince of Ath Dara, stares out over the farming village of Alleen. A clear night with everything is as it should be in Ath Dara.  Until in a flash of light, magic is born. An Tsolais, one which will change the world he thought he knew.

Haana Elethia is a pariah to the humans of Alleen because she is different. Even her own family believes she harbors darkness in her soul. But Haana isn’t drawn to darkness and suffering, except to heal it. She is Mender a Chroi–Healer of Hearts. Cast from her family, she grows up alone in the forests of the kingdom.
​
Worlds collide the day she is chased through the woods by a gang of human boys crossing paths with Kíeran and his patrol. The world of Elves and Humans are thrown together in a war against a necromancer, Revenant, and former Mender an Chroi.

And before I go, here’s what happens outside my window in N.J. Poor guy’s a little scrawny from winter and tough love by a mama bear who kicked him out of the den, but I’ll bet he’ll be fat and glossy by the end of the summer. BTW the garbage had been taken outside for a trip to a locked garage about ten minutes prior. 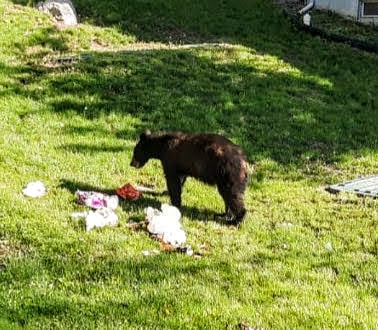